Jaipur is also known as pink city of Rajasthan because most of the bazaars and houses in city are painted in Pink colour. Jaipur is capital of Rajasthan and it is full of monuments likes forts & palaces, there are traditional bazaars as well as modern shopping complexes, there is something for everyone. In last two-three decades, the city has developed a lot and it had also became an important center for textile export as well as for handicraft products. I had visited Jaipur numerous time, and to be honest, I lost the count.

I have been to Jaipur 3-4 times as a tourist and many times I visited for work as I used to work with some of the textile export factories in Jaipur  with my European clients. Though during work trips, I didn’t get time for sightseeing due to the busy schedule sometimes I managed to go out at night for dinner or for shopping with my clients but nothing more then that.

We used to see outer boundary walls of Jaipur forts, while entering the city. I have so many memories from different trips. My last trip to Jaipur was when we went to Pushkar while returning to Delhi we stopped in Jaipur for 3 days. During this trip, I went to many monuments again and refreshed my memories.

My last trip to Jaipur was when I went to Pushkar and while returning to Delhi we stopped in Jaipur for 3 days. During this trip, I went to Jaipur forts and many monuments again to refreshed my memories.

We started from Pushkar around afternoon, reached Ajmer in 30 minutes. From Ajmer, we booked a Volvo bus of Rajasthan roadways bus and it took us 2 hours to reach Jaipur. The road condition between Ajmer and Jaipur is good, so our journey was fast and comfortable. While we were on the way to Jaipur, we realized that we have the evening free and we thought why not we spend it doing something interesting.

I had heard that Jaipur forts and other monuments look totally different at night, so we decided to explore the monuments of Jaipur by night and booked our tour with RTDC. We were staying in Rajasthan tourism’s hotel, so the tourism dept’s cab picked us from the hotel. The tour was supposed to start at 06.30 PM but it actually started at 07.00 PM. It was a drive through city by night tour. We saw Raj Mandir Cinema Hall, Statue Circle, Amar Jawan Jyoti, Vidhan Sabha Bhawan, Birla Mandir, Albert Hall, Hawa Mahal, Jal Mahal, Amer Fort and our last stop was Nahargarh Fort for dinner. Our dinner at the fort was a traditional vegetarian affaire and food was yummy.

We saw all the above-mentioned monuments from outside and stopped in front of every place for few minutes. These monuments looked different in the evening light and the view of Jaipur city from the top of Nahargarh fort was beautiful. We returned to our hotel after 4 hours tour.

Next day we decided to explore the forts of Jaipur and hired a cab for the day. Jaipur is Rajasthan’s biggest city and all Jaipur forts are on outskirts of the city. The modern Jaipur was founded in 1772 by Maharaj Jai Singh II as the capital of Amber because due to the increase in population there was a growing scarcity of water in Amer.

To accommodate its people King decided to develop a new city. The Maharaja (King) of Jaipur had a great interest in science, culture, and mathematics and he wanted to develop a planned city so he sought the advice from a scholar from Bengal called Vidyadhar Bhattacharya. That’s how the first planned city of India came into existence. It took 4 years to complete the palaces, roads, and markets of Jaipur.

We hired a cab for the full day and started. Our first stop was Jal Mehal which is on the way to the fort. It’s an on the go monument because they don’t allow inside the lake or Jal Mehal. We stopped for some time and clicked some pictures before moving to our next place Kanak Vrindhavan garden. 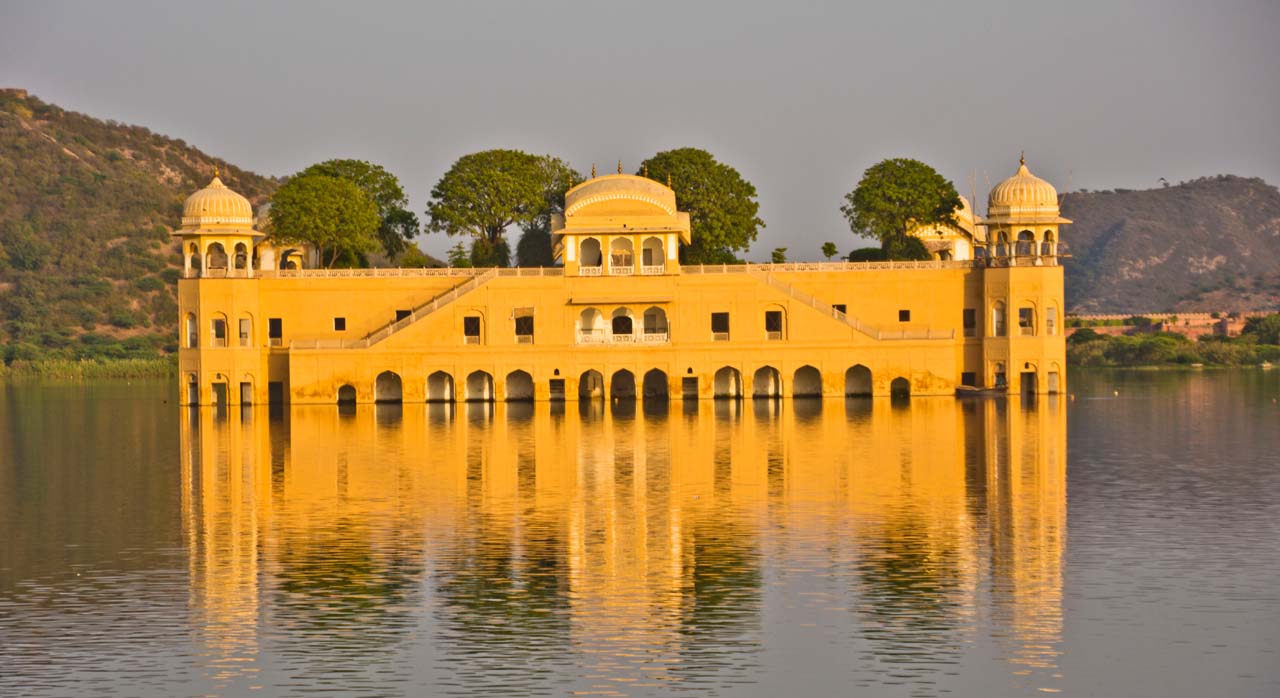 This garden was made as recreation park for Maharajas and Maharanis some 250 years ago. It is situated in a small valley surrounded by Aravali hills.

There are intricately designed chatri’s, a temple of Govind Ji and a series of fountains. These structures add to the landscape of garden and make it look like a royal garden. It’s an interesting place to go for a picnic in winter months. But we had other plans and more places to see during the day, so we left after spending some time. Our next stop was Nahargarh Fort.

Nahargarh Fort is situated on hilltop and road leads to fort goes through the Nahargarh biological park. There is a check post as we reached the starting point of the biological park and we paid 300 Rs for the car’s entry fee. Every vehicle going to fort has to pay this amount.

The road leading to the fort is narrow and there were shrubs & acacia trees on both sides of it. We entered the fort from “Tadigate”, there was a temple next to the gate and it is dedicated to the warrior king Nahar Singh Bhomia.

We reached the main fort complex. The main attraction of fort is Madhavendra Bhawan, it was built by Sawai Madho Singh. It is a double story building with suites for king and his twelve queens. These suites are divided into nine similar apartments, each one consists of a bedrooms, lobby, toilets, kitchen, and store.

Another important attraction in fort complex is Diwan-I-Aam, it’s an open-air enclosure where the king met people of his kingdom to listened to their problems and complaints.

After exploring fort building, we walked to the far end of the fort to the Padao restaurant. It’s an open restaurant and from here we saw the overview of Jaipur city. There are two rooms in fort complex for rent and these can be booked through Rajasthan tourism’s website.

From Nahargarh, we went to Jaigarh Fort which is approximately 6 Km. The driver parked the car outside and we went inside the fort. It’s highly fortified and spread in an area of 3 Km length and 1 Km width.

It’s a big fort and there are ramparts slops everywhere in the fort to provide access to the upper levels. As we walked we saw the central watch tower, it is closed for public but in earlier days it provided an excellent view of surrounding area. We saw the courtrooms and halls with screened windows, there is a garden also within its courtyard. There is an artificial lake also in the fort, which use to store water for drinking in earlier days.

There is a subterranean passage connecting Jaigarh Fort with Amber fort Jaipur and in earlier days both were considered one complex. The main purpose of Jaigarh fort was to provide security to Amber fort Jaipur.

There is a museum near triple arched entrance Awani Darwaza, here we saw the old photographs, weaponry and different things used by rulers of Jaipur.

We walked to the top level of the fort and here lies the Jaivana canon, when it was made it was considered the world’s largest cannon on wheels. This canon is one of the main attraction in the fort. It is a big complex and we have to walk around a lot in the fort.

We were feeling lazy, so we hired a jeep to go to the Amer Palace‘s gate instead of walking to the Palace. The jeep guy drove to the fort through narrow lanes surrounded by houses. We enter the palace through Suraj pol and it opened in the courtyard called Jaleb Chowk.

We bought the entry tickets from the courtyard and moved further into the palace. There are 4 courtyards in the palace.

The Ganesh Pol gate is a most beautiful gate in the palace with a temple at it’s right. There is sitting place called Suhag Mandir above this gate, here royal women will sit and watch the proceedings of Diwan-e-Aam from lattice window.

The second courtyard has Diwan-e-Aam on a raised platform with 27 colonnades, here king used to a held public audience.

The third courtyard is entered through Ganesh Pol Gate. In this courtyard king and his family lived with their attendants. The main attraction of this part is Sheesh Mehal, central garden, and Sukh Mahal. Sheesh Mehal or Mirror Palace is the most beautiful structure in the palace, it’s walls and the ceilings are carved with beautiful flowers and other paintings made with glass.

The fourth courtyard had many rooms, which open in a common corridor. Here royal family’s women, mistresses lived with their female attendants.

I walked around in palace and saw all these places in different courtyards. We returned to the first courtyard and from here, we saw the royal Garden Kesar Kayari at the bottom of the palace near Maota Lake. It is a well-manicured garden and looked beautiful from top of the fort.
After exploring the palace, we spent some time in Surabhi restaurant inside the palace to refresh ourselves.

After the show, we returned to our hotel and decided to have dinner in hotel’s restaurant before going to sleep.

If you are running short of time and have only one day to explore than you visit these places in Jaipur.

Another city in Rajasthan where you can see the yellow sandstone structures is Jaisalmer. There are havelis and grand fort.

* Wear comfortable shoes because there is a lot of walking required.

** Buy a composite ticket for 2 days, it covers most of the monuments of Jaipur and saves times as well as money.

** The underground passage between Jaigarh fort and Amber Fort Jaipur is open now but you need to check with the tourism office in advance.

* Carry water bottles because it is hot and dry during the day even in winter months.

Jaipur is a good place to shop souvenirs in India. Here in my complete guide for Souvenirs shopping in India.

34 thoughts on “Jaipur Forts – The Royal Heritage of Pink City”

This site uses Akismet to reduce spam. Learn how your comment data is processed.